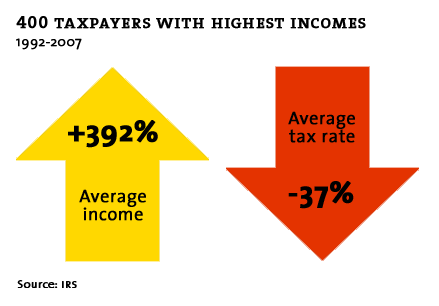 IN THE HOUSE OF REPRESENTATIVES AND SENATE

To request the Congress enact legislation that will return Fair Tax Brackets to our decimated economy that will help promote freedom, fairness, and economic opportunity by returning IRS tax brackets that existed when America’s middle class and economy grew and prospered.

Returning Fair Tax Brackets to the IRS Act of 2009

WHEREAS, when we had progressive rates generations ago on the very rich, we built the world’s finest road, utility, education, space, and science infrastructure; and with that came the largest, most educated, and hardest working middle class the world had known.

WHEREAS, today’s wealth accumulation is more concentrated than in 1999, when the richest 1% (about 2.7 million people) has as much to spend after taxes as the bottom 100 million.

WHEREAS, this trend, along with the income cap on Social Security taxes and the non-indexing of the Alternative Minimum Tax, has increasingly moved the top federal bracket onto what some consider upper middle income Americans.

WHEREAS, under this skewed tax structure the super rich, those taking home incomes high above the $250,000 top bracket, have controlled increasing amounts of wealth, while the wealth of the middle class and those below has dramatically shrunk.

WHEREAS, if one assumes an inflation rate of 4% since 1954, then in 2008 the top marginal income bracket would have been $1.2 million.

WHEREAS, on average, those top 400 paid an effective federal income tax of 17%, much lower than the top proclaimed bracket of 35%.

These statistical trends indicate that generations of implementing an inequitable and unjust tax policy has helped accumulate wealth and power by a few.  In the meantime, the costs of addressing our many public policy needs has been borne by the growing poor and shrinking middle class.

Especially in today’s economy, revenues are needed to pump economic vitality back into our middle class.  It is time to raise revenues from the mega wealthy that can help address community needs, strengthen community infrastructure, and help rebuild America’s middle class, which is the engine that will again drive and rebuild a smarter Americans economy.

Part of the revenues raised from instituting these fair tax brackets will be earmarked and recycled into involving Americans of all economic classes in direct service and learning on national and international needs, so that our long term public policy costs and blunders will be reduced.

Since Vietnam, we have irresponsibly continued funding wars on our national and personal credit cards.  The illogical Communist empire fell from the added burden of fighting frugal terrorists whose dad to day life hardened them against a plasticized life.  Now our economic system, based on a skewed tax base that rewards gimmickry production and the over comfortably ensconced rich over building and hard working Middle Americans, is poised to have the strategy of frugal terrorists topple what was once a revered, civil, and thoughtful economic system.  The FTB reform is part of the process that returns us to a fairer tax system that once helped build a strong and logical economy that earned the world’s respect.  While doing so, it set asides some of the revenues raised via the new FTBs to ensure that the AWSC service learning programs builds peace, health, and vision at home and abroad.

Therefore, be it resolved that this bill will add two tax brackets the revenues from which will help promote economic freedom, fairness, and growth opportunities forAmerica’s middle, lower, and upper classes.

Sec 5.  Directed use of a portion of FTB additional revenues:

HEALTHY EARMARKING OF SOME OF THE FTB RAISED  REVENUES

America’s wealth and ensuing power has been built on the shoulders of Americans of various ethnicities and economic classes.  Too often during peaks of American affluence, we forget how America’s national strength resulted from a plethora of individual, community, state, and national efforts.

If the traditional and nontraditional funding mechanisms defined in the AWSC Congressional Proposal should fall short of fully funding the AWSC, this FTB proposal will earmark funds to involve 21 million Americans in voluntary national service at home and abroad via the American World Service Corps (AWSC)Congressional Proposals,

THEREFORE, this proposal will set aside a significant portion of revenues raised from implementing these tax brackets to be assigned to cover the healthy investment for at least the next 27 years in community and international service programs such as those proposed under the American World Service Corps (AWSC) Congressional Proposals, which Congresswoman Woolsey has offered to introduce in the 111th Congress.  The key AWSC proposed bill is at

The FTB revenues earmarked to fund AWSC programs will involve many, many more Americans in peaceful, productive service learning.  Earmarking such FTB revenues will smarten our long and short-term public policies in every state and while simultaneously building our national character and world image.

There is little or no cost in reinstating these fair tax brackets to the IRS Code and changing IRS forms to reflect the changes.

In 2001, the top 1% of households controlled 39.7% of the financial wealth of America.  Wealth, and the power that accompanies it, has been growing disproportionately for about a generation.  It is time to direct some of that concentrated wealth flows into strengthening America’s physical, moral, and intellectual infrastructure now and for the long term.

The implementation of these tax brackets could yield substantial revenues to involve all Americans in doing good at home and abroad.  Such service learning involvement develops the analytical minds that will produce smart short and long term productive solutions, ventures, and businesses that build and maintain economies that benefit all economic classes.  While implementing these tax fair brackets, those living with the FTB adjusted net income will still have a very comfortable lifestyle.

Some graphic documentation for this proposed bill can be found at:  http://worldservicecorps.us/tax_bracket_reform.htm

"This world of ours... must avoid becoming a community of dreadful fear and hate, and be, instead, a proud confederation of mutual trust and respect."

"We have it in our power to begin the world over again."

I have only one yardstick by which I test every major problem - and that yardstick is: Is it good for America?